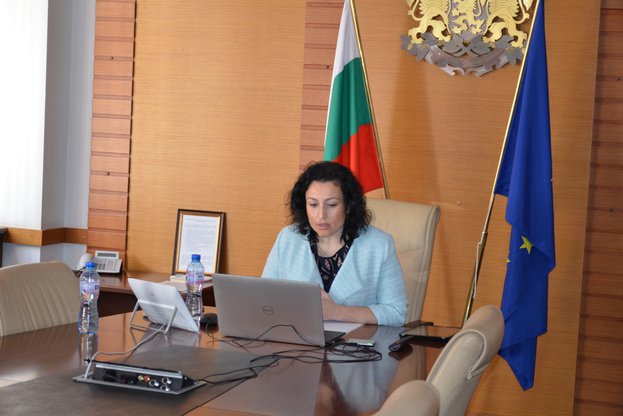 So far, nearly 1917 rose producers, rose processors and producers of oil rose products have submitted their registration applications. The requested rose plantations are 21,029 dca, which is about half of the area in the country planted with oil rose. This became clear during the Oil Rose Advisory Board, held today via videoconference. By the end of May, all actual rose producers and processors shall submit registration application and a declaration of valid contracts.

During the meeting, Minister Taneva accepted the proposal of the Professional Association of Rose Producers in Bulgaria - when negotiating, manufacturers to indicate the registration number of an application. This option will be valid for oil-rose manufacturers who do not yet have an order for registration. The President of the Association Mr. Hristo Nikolov commented that there is no problem with the processing the applications.

With the beginning of the rose-picking campaign, identification of oil rose plantations will also begin during the flowering phenophase by committees, comprising of appointed representatives from the Executive Agency of Variety Testing Field Inspection and Seed Control, the Institute of Rose and Essential Oils and representatives of the relevant Regional Directorate of Agriculture. The identification will give information on the type of plantation - how many of the areas are planted with Rosa damascena and Rosa alba.

Movement through the border checkpoints of workers, who will be engaged in rose-picking campaign was also discussed. According to the order of the Minister of Health dated of 10.04.2020, the drivers of vehicles transporting agricultural workers to arable agricultural areas shall submit an official service note from the employer of the seasonal workers, indicating the route and the list of workers engaged. The order further states that the employer is obliged to ensure that personnel are protected with necessary equipment - face masks and gloves, and the carrier is obliged to disinfect the vehicle prior to every departure.

"We look forward to a decision from the European Commission to allow the programming of a horizontal COVID-19 measure with the unallocated funds from the Rural Development Program. Provided that the measure is adopted, its implementation will happen at the end of the harvest year, when there is enough information of the impact of the crisis on the markets of the agricultural produce. The process will be consulted with the branch in the course of its programming, "said the Minister of Agriculture, Food and Forestry Desislava Taneva. Regarding the workforce, Minister Taneva recalled that currently registered unemployed people can be hired to harvest, while receiving both their unemployment benefits and wages for their work in agriculture. "I urge farmers to state their need for labor force in the labor offices," Taneva said. She commented that the state could not interfere in the market processes of rose buying and called for a compromise during the negotiation of prices. "You have a long-term relationship and you need to find a balance between each other by uniting for one purpose," the minister said further.

"The deadline for reporting and document submission under the scheme" Aid to compensate farmers for costs related to the implementation of measures under the National Pest Control in Perennials Program during the winter period "was extended to 15 May. Currently, a number of 340 applications have been submitted by oil rose growers, "announced Ivan Kapitanov, Executive Deputy Director of the State Fund Agriculture. The SFA will process applications as soon as possible, so that beneficiaries can receive their payments as soon as possible. Ivan Kapitanov acquainted the participants in the meeting with the financial instruments offered by the Bulgarian Development Bank, as well as the schemes for granting interest-free loans.