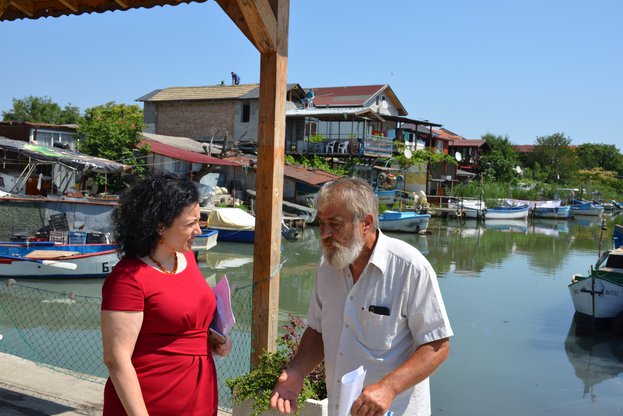 Projects for more than BGN 10 million under the Maritime Affairs and Fisheries Program (PMDP) 2014-2020 are being implemented on the territory of the Municipality of Burgas. This became clear during a meeting of the Minister of Agriculture, Food and Forestry Desislava Taneva with Dimitar Yanchev, Chairman of the Association "Sea Accord", which was held at the fishing village Chengene Scaffolding near Burgas. Deputy Minister of Agriculture, Food and Forestry Dr. Lozana Vasileva also attended the meeting.

Minister Taneva added that nearly BGN 7 million out of these funds have been spent for investments in aquaculture, boat docks, as well as for processing of fishery and aquaculture products for 12 projects under the MAP. She announced that the Local Fisheries Initiative Group (FLAG) "Burgas-Kameno" has been approved to implement a strategy for community-led local development, on which projects have already been launched with a total budget of over BGN 3 million.

Three projects under the MAP with a total value of over BGN 2.6 million for the modernization and popularization of the fishing village "Chengene skele" are afoot. At the moment, a total of BGN 430 thousand have been paid for the construction of boat docks and for support of fishermen activities. The other two projects aim to create an ethnographic complex in order to promote the area.

Due to the COVID-19 pandemic, the fisheries sector was supported with more than BGN 17 million and projects acceptance has been opened under three emergency measures of the Program. There is a full absorption of funds under measure 1.9 "Support for owners of fishing vessels and fishermen to overcome the economic consequences of the outbreak of COVID-19 due to temporary cessation of fishing activities" A total of 77 projects worth jover BGN 2 million have been submitted.