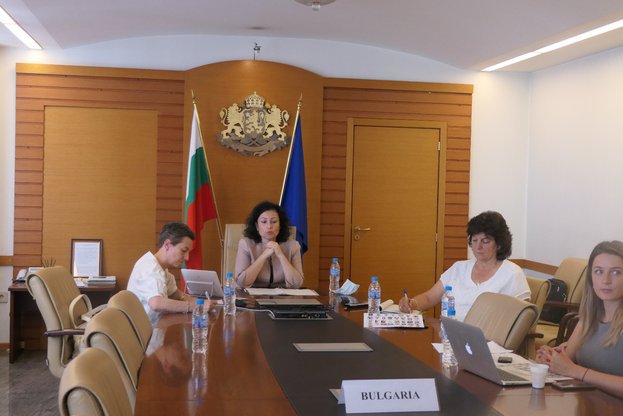 The key topics for Bulgaria in the debate on the future CAP continue to be a more ambitious external convergence, continuing the coupled support and maintaining the National Transitional Assistance. This was what the Minister of Agriculture, Food and Forestry Desislava Taneva stated during an informal videoconference meeting of the EU Ministers of Agriculture. According to her, the abovementioned instruments are those that support the vulnerable and underfunded sectors in agriculture. Minister Taneva added that our country insists on excluding small farmers from the conditionality control. The Bulgarian Minister welcomed the announcement of the Green Deal’s ambitious goals. "This is a perceptible public need and we must give our farmers enough financial opportunities to be an essential part of achieving these goals. Their implementation in our strategic plans must be in accordance with national specifics ", Desislava Taneva was categorical. Therefore, sufficiently reliable indicators for evaluation of each country should be defined, she emphasized.

Minister Taneva pointed out that all European farmers look forward to the end of the debate on the CAP 2021-2027 and the adoption of the Multiannual Financial Framework. She highlighted that the Croatian presidency has made a significant progress and that its report was the basis for continuing the debate for the next programming period. Desislava Taneva expressed hope that during the German presidency the new CAP will be finalized.

During today's meeting, the agri-ministers also discussed the EC's Communication to the European Parliament and the Council: Towards more sustainable fishing in the EU: state of play and orientations for 2021. With regard to the Black Sea which is distinguished by its specific fisheries, Bulgaria’s Minister of Agriculture and Food Desislava Taneva noted that progress has been made within the frameworks of the General Fisheries Commission for the Mediterranean. The efforts of Bulgaria and Romania to improve data collection and effectiveness of control must be appreciated, Minister Taneva noted. The implementation of common measures and actions by all Black Sea countries is a key step towards sustainable fisheries in this water basin in the long run, Minister Taneva said and thanked the European Commission for the package of measures which helped the Fisheries and Aquaculture sector amidst the Covid-19 pandemic.