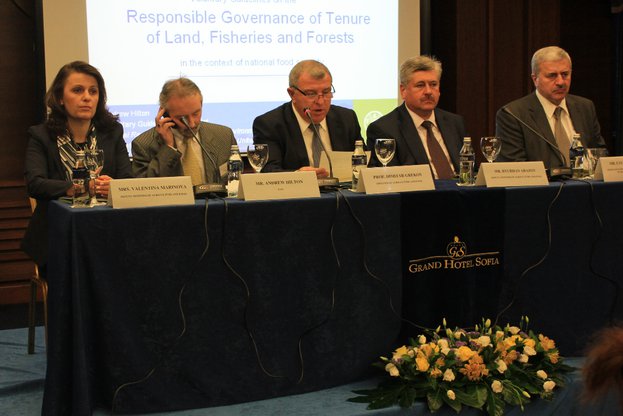 Minister of agriculture and food Prof. Dimitar Grekov opened a seminar entitled “Raising the Awareness of the Voluntary Guidelines on the Responsible Governance of Tenure of Land, Fisheries and Forests in the Context of National Food Security”. The event was organized jointly by the Food and Agriculture Organization of the United Nations (FAO) and the Ministry of Agriculture and Food in Sofia Grand Hotel, and will end on 31 October 2013.


“The role of Bulgaria in FAO is extremely important. One of the priorities in our policy is improving the standard of living of the population, for which a significant part is played by the Bulgarian agriculture. The sector forms about 5% of the Gross Value Added, created by the economy of Bulgaria. The persons employed in the sector comprise nearly 19% of all the persons employed in the economy of the country”, said minister Grekov in his welcoming speech to the participants. He added that the efforts of MoAF were directed towards continuing the modernization of agriculture, using new technologies and encouraging the investments in this area. The minister said explicitly that the present seminar constituted an important impulse for improving the state of food at regional and global levels. The Bulgarian government is ready to participate actively in carrying out specific actions to achieve food security in the region. To this end, it is important even to a greater degree to combine and specify the efforts of the different institutions, which should work jointly with the international and the financial structures, the civil society and the scientific community”, explained Prof. Grekov.

“Among the subjects to be discussed in the context of the seminar are issues related to the governance of land, the tenure and the access to land for everybody needing it, and issues related to feeding the population”, said in his welcoming speech to the participants deputy-minister Burhan Abazov. He expressed his satisfaction that such event was held for the first time in Bulgaria and explained that it was honour for MoAF to host this forum. “I am certain that each state should discover on the basis of adopted principles and best practices the ones which are working best for it and for its national economy”, said further deputy-minister Abazov.

In the context of the forum, the document, prepared by FAO on the voluntary guidelines on the responsible governance of tenure of land, fisheries and forests, and approved in May 2012, was presented to the participants. Andrew Hilton, Senior Land Tenure Officer for FAO at UN, explained that the main objective for the participants in the seminar was to make the common document and its guidelines on responsible governance of land find their actual application in the policy both at regional and at national levels.