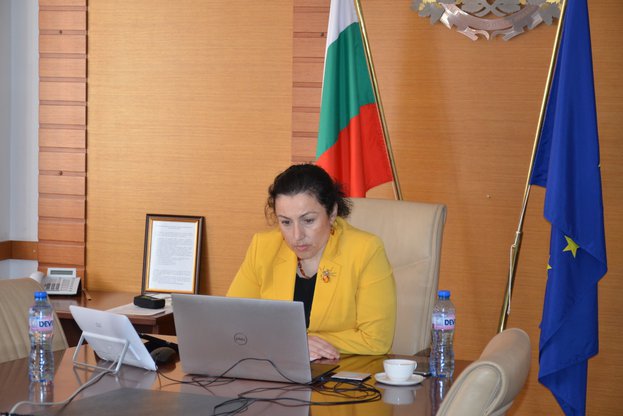 According to the information, provided by the Bulgarian Food Safety Agency (BFSA), is expected a double increase in the sales of Bulgarian lamb meat in the country compared to 2019. From April 1 to April 27, 78 414 lambs were slaughtered. Last year, between April 1 and May 6, the number of animals sold was about 55,000. It became clear during a meeting of the Advisory Board on Livestock Breeding held today via videoconference.

The representatives of the branch expressed their gratitude to the MAFG and BFSA for the measures taken to increase the consumption of fresh Bulgarian lamb meat and reported as a successful the joint campaign conducted.

During the meeting, Minister of Agriculture, Food and Forestry Dessislava Taneva recalled that the European Commission is to come up  with a decision to allow the opening of the COVID-19 horizontal measure with the unspent funds under the Rural Development Program. She explained further that if the measure is adopted, its opening will be consulted with the branch representatives. "Its implementation will be at the end of the harvest year, when there are enough data on the impact of the crisis on the markets of the agricultural production," Taneva explained.

The members of the Advisory Board received information on the measure package, regarding the current COVID-19 pandemic, proposed by the EC. It provides a private storage aid in the milk and meat sector.

Dairy products eligible for private storage are skimmed milk powder, butter and cheese. The maximum storage amount of cheese allowed in Bulgaria is 889 tonnes, which is 22% more than the quota in 2016. The storage period is between 90 and 180 days. Our country has experience and practice in implementing such an exceptional aid scheme, as In 2016, we absorbed 36% of predetermined maximum amount of stored cheeses. It is important to emphasize that the support amount includes both fixed storage costs of EUR 15.57 per tonne of production and EUR 0.40 per tonne per day for the duration of the contracts.

For the meat (beef, sheep and goat meat) products. This scheme will allow the temporary withdrawal of products from the market for a minimum of 2 to 3 months, and a maximum period of 5 to 6 months. The measure is envisaged to allow collectively plan milk production or withdraw products from the market. Storage by private operators will also be allowed. Such agreements and decisions would only be valid for a period of maximum six months.

A proposal of the ministry’s officials to amend Art. 2 of The Council of Ministers Decree No. 70 on the provision of basic groups of food produced on the territory of the Republic of Bulgaria at the outlets representing chain of stores has also been discussed during the meeting The amendment aims at guaranteeing the purchase of Bulgarian raw milk and at the same time preventing products that are not analogous and not produced in Bulgaria to be removed from sale in stores. Industry associations have expressed differing opinions on the proposal.

The Deputy Executive Director of the State Fund for Agriculture Ivan Kapitanov introduced the financial instruments and schemes for providing interest-free loans to individuals through commercial banks.