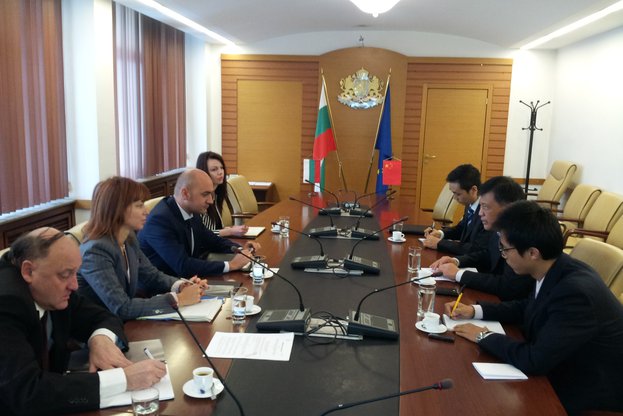 Minister of Agriculture and Food Vassil Groudev meets with Ambassador of the People's Republic of China to Bulgaria, H.E. Wei Jinghua. Both officials discussed the prepared by the Ministry of Agriculture and Food concept on the establishment of a ”16+1” centre for cooperation in the field of agriculture between China and the countries from Central and Eastern Europe in Bulgaria. Minister Groudev remarked Bulgaria had support in principle from all the 15 countries from Central and Eastern Europe for the establishment of the centre in it, while seven of them had already confirmed their agreement to that. The Chinese Ambassador informed the minister a meeting between officials from the countries from Central and Eastern Europe and China would be held on December 16 in Belgrade.


“The most important priority for Bulgaria is continuing and strengthening the relations between the two countries in the agriculture sector,” said Minister Groudev.“I am glad we will meet Chinese exhibitors at the beginning of November, to whom we will provide stands to participate in specialised international exhibitions in the field of agricultural products, foods and drinks, in [the capital] Sofia,“ the minister added.