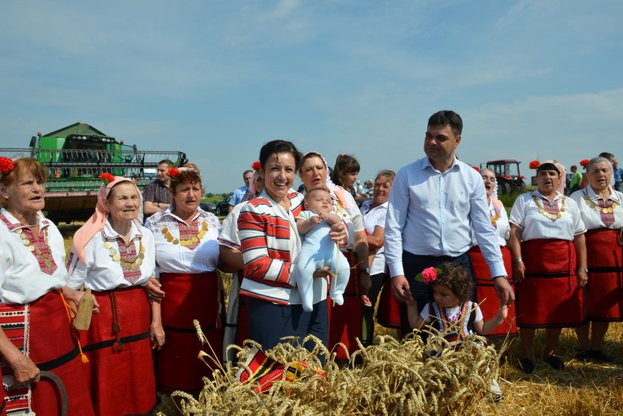 “This year we expect a good wheat harvest of 4.3 - 4.5 million tons”, said Minister of Agriculture and Food Desislava Taneva, speaking in the village of Stransko, Dimitrovgrad municipality, where she attended a traditional reaping ritual. The information is given by the Regional Agriculture Directorates by mid-June. According to Taneva, the average yield expected is about 415 kg of wheat per hectare. She said that expectations about the crop were good and despite the bad weather, less than 1% of the lands were flooded. The minister hoped that the agricultural producers wold report a good year in the end of 2015.


“Grain production sector is one that after the accession of Bulgaria to the European Union has been developing very well and the sector became competitive “, commented Minister Taneva. She added that the interest in the agricultural sector increases every year and the proportion of uncultivated areas decreases significantly.

Desislava Taneva underlined that the efforts of the state in the current programming period 2014-2020 of the RDP will be oriented towards the revival of other sectors to make agriculture in the country more balanced. "We should put on the table our traditional products by local manufacturers that are our registered trademark," said the Minister.