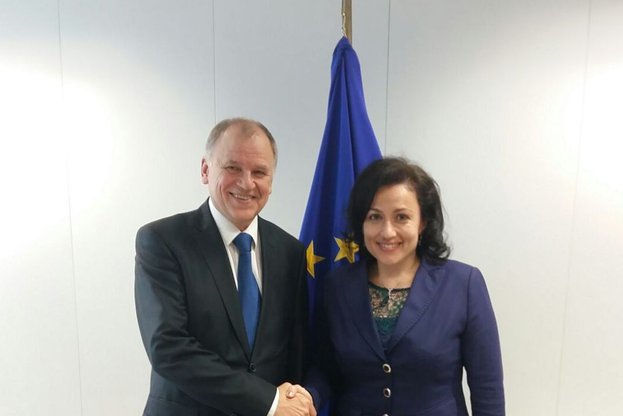 “Bulgaria will insist the European Commission to come out with a special decision on measures to tackle the Lumpy skin disease”. This became clear at a meeting between Bulgarian Minister of Agriculture and Food Deslava Taneva and European Commissioner for Health and Food Safety Vytenis Andriukaitis within her participation at the sitting of the EU Agriculture and Fisheries Council in Brussels


During the meeting Minister Taneva made a proposal to the Commission to take measures that are more effective and cause minimal loss for farmers and Member States. "We offer the introduction of preliminary vaccination in areas with the expected risk, while the stamping out method to be applied only for infected animals with clinical symptoms. There is also a need to take into account the analyses made by Bulgaria and Greece in terms of the disease so as to avoid further distribution in Europe and to take urgent measures,” said Minister Taneva. She added that it is necessary to decide and to change the regime of restrictions in trade with products that match the risk.

"We need to hear the views of the Bulgarian scientific community, which has a different view on measures and how to tackle the disease nd the opportunity for the method of killing all potentially infected animals to be changed and to kill only those with disease symptoms," said Taneva.

“We managed to provide vaccines very fast and Bulgaria held a successful vaccination procedure. This shows that the coordination between Bulgaria and the EC is at very high level,” European Commissioner Andriukaitis remarked.

“We will provide the entire necessary technical and financial support by using all crisis-tackling instruments and methods,” he pointed out, adding that he evaluated highly the efforts made by Bulgaria.

Minister Taneva thanked for the good work with the EC.