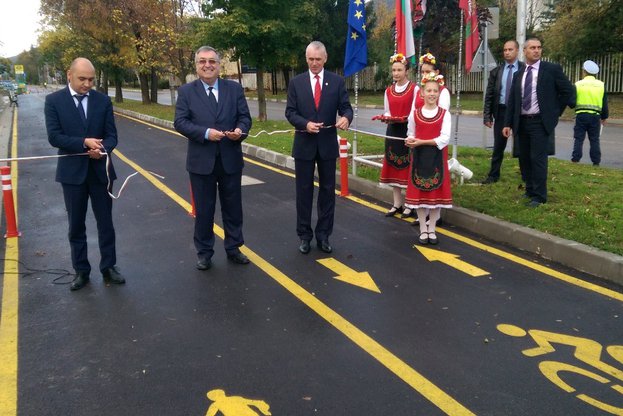 Minister of Agriculture and Food Vassil Groudev together with  the Prime Minister Prof. Georgi Bliznashki and the mayor of the town of Pravets Rumen Guninski opened bicycle lane  - a project funded under the Rural Development Program / 2007-2013 /.


"We have an implemented project that allows the residents and visitors of the town of Pravets to practice their hobby on the new bicycle lane," said Minister Groudev. The project is funded under the RDP Measure 313 "Encouragement of tourism activities".

Agriculture Minister highlighted that a total of 30 projects totaling BGN 25,165,372 have been agreed under the RDP  in Pravets Municipality They are aimed at improving the transport infrastructure, construction of municipal roads of strategic importance for the region, expansion of the road network, improving buildings and construction of tourist attractions.

The Mayor Rumen Guninski gifted Minister Groudev a municipality plaque to commemorate the successful partnership.  In his turn, Minister Groudev awarded an honorary medal of the ministry to the mayor, stressing that Pravets is one of the municipalities that is most actively utilizing the RDP funds.