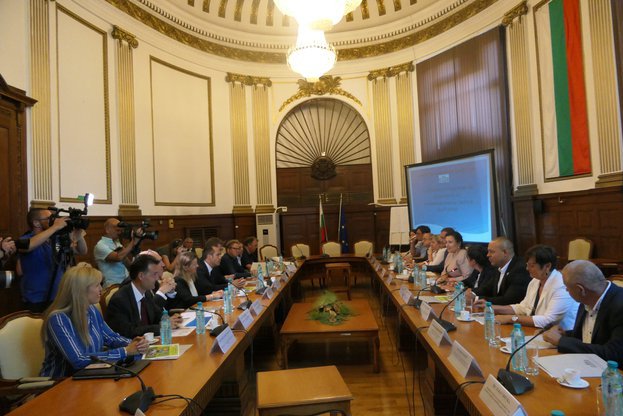 The Minister of Agriculture, Food and Forestry Dessislava Taneva met with representatives of the Confederation of European Community Cigarette Manufacturers. The meeting was organized on the initiative of the National Association of Tobacco Producers in Bulgaria (NATP). The people present were made aware of the state of development and the tendencies within the tobacco producing field in our country in order to pass the judgement whether to enter the Bulgarian market. The harvested areas were taken into consideration, as well as the manufacturing of the raw material for the last 4 years. In 2018, the tobacco bought in Bulgaria amounts to 5,304 tons, out of which 3,299t Basmi and Kaba Kulak tobacco, 1,457t – Virginia tobacco and 548t – Burley tobacco.

Among the topics discussed was also the structure of the farms according to area under cultivation and the amount of the registered producers. It was noted that the production and conservation of raw tobacco in our country is done in accordance with purchase contracts, concluded between tobacco producers and buyers. It was also pointed out that certified seeds are being used in the tobacco production in our country, in accordance with the Seeds and Planting Material Act. The Director of the Tobacco and Tobacco Products Institute – Markovo, Assoc. Prof. Dr. Maria Kasheva presented the activities within the scientific research field, the selection of new tobacco sorts, as well as the gene pool support.

The President of the National Association of Tobacco Producers Tsvetan Filev expressed his satisfaction with the good communication with Minister Taneva and her team. He emphasized that it is important everyone in the production chain – producers, processors and buyers – to work together.

The Deputy Minister of Agriculture, Food and Forestry Tchavdar Marinov, representatives of the Bulgarian Tobacco Association, of the processing field and members of the Confederation of European Community Cigarette Manufacturers were also present at the meeting.