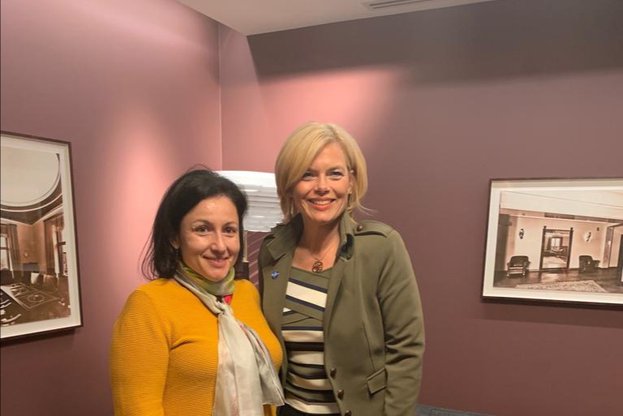 The Minister of Agriculture, Food and Forestry Dessislva Taneva met with Julia Klöckner, the Federal Minister of Food, Agriculture and Consumer Protection of Germany during the Informal Meeting of the Agriculture Ministers in Helsinki. During the meeting, the two of them discussed the progress of the debate for the reform of the new CAP and Germany’s position to reject the coupled support in the next program period. Minister Taneva noted that if the financial funding for the coupled support for Bulgaria is to be decreased, this would affect over 13 thousand farmers in the Livestock sector and over 13 thousand farmers growing fruit and vegetables. According to her, these sectors have significant economic difficulties. The Bulgarian Minister emphasized that the agrarian sector in our country is the most dependent one on climate conditions and factors compared to the other economic activities. Dessislava Taneva also said that due to the increasing challenges, it is necessary to secure a stable budget for an adequate funding within the framework of the new CAP.

The Minister of Agriculture, Food and Forestry explained that the coupled support in our country is directed at the small and medium-sized agricultural farms which have increased needs of funding in order to be competitive. ‘This is what the data shows in the analysis of the sector schemes for the 2015-2019 period, prepared by the Institute of Agricultural Economics,’ also stated the Bulgarian Minister. She added that the Livestock and the Fruit and Vegetables sectors, which are the subject of the coupled support, provide employment for 38.5% of all the people employed in the agriculture in the country. They provide labor opportunities and income to vulnerable groups in the rural areas where the employment opportunities are limited.

Bulgaria shall send the SWOT analysis in Germany, so that Germany could review the situation in our country in details. During the meeting Minister Taneva presented to the German Minister the structure of the farms in Bulgaria.