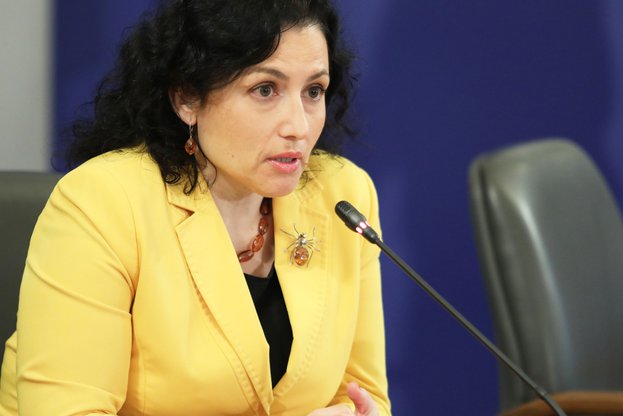 An amount of EUR 175 million has been diverted to several measures under the Rural Development Program (RDP) 2014-2020 to support farmers. This was announced the Minister of Agriculture, Food and Forestry Dessislava Taneva during a briefing at the Council of Ministers after a meeting with the Prime Minister Boyko Borisov, the Deputy Prime Minister Krasimir Karakachanov and a farmer Krasimir Kumchev. She added that this became possible thanks to the sixth notification of the Program, approved by the European Commission. Minister Taneva recalled also that it was our country which initiated the changing in the scope of the RDP in the autumn of 2019. A total of EUR 40 million of these funds are under measure 11 "Organic production". " Supporting the sector is a commitment we have undertaken and fulfilled. Reception of applications under the measure is already open and agri-producers can request areas, animals and bee families. Entirely new organic producers, as well those who are in their 5th year of application, can apply under it and for another year of support, "the Agriculture Minister specified.

Minister Taneva pointed out that thanks to the approved notification the opening of the application reception under Measure 5 "Restoration of the potential for agricultural production, damaged by natural disasters and catastrophic events, and the introduction of appropriate preventive measures" will be opened in the next two weeks "It will support the animal breeding sector, in view of epizootics and farm biosecurity. Measure 4.1 "Investments in agricultural holdings" is expected to adopt, to support breeders again, "said Desislava Taneva. She added that part of the funds transferred enabled the announcement of targeted application reception under sub-measure 6.3 "Starting aid for the development of small farms". It is entirely aimed at supporting small farms in order to increase farm biosecurity.

Minister Taneva announced that additional support for farmers is expected to be finalized. "This will be done by the EC decision to create and design a horizontal measure COVID-19 within the scope of the RDP 2014-2020, on our proposal " she said. The distribution of the aid to vegetable producers to be based on the income criteria, which will prove the production realized suggested farmer Krasimir Kumchev,. "We hope that in May the communication at EC level will be completed as well as all the procedures required for its implementation " she added.

Agriculture Minister said that from today farmers can claim area if they fall within the new scope of disadvantaged areas. "These are 60 land areas in 11 districts of the country within the scope of direct payments 2020. She added that the proposals, initiated by Bulgaria at the end of last year to support the agriculture sector to be finalized by June. These proposals gathered the necessary support within 6 months.

“We are doing our utmost to maximize access for producers to all possible channels of product offering to the Bulgarian consumer. I hope these contacts and relationships will be long term. Undoubtedly, farmers will realize the need for association and investment in primary processing in order to be able to meet the requirements, "Minister Taneva categorized.