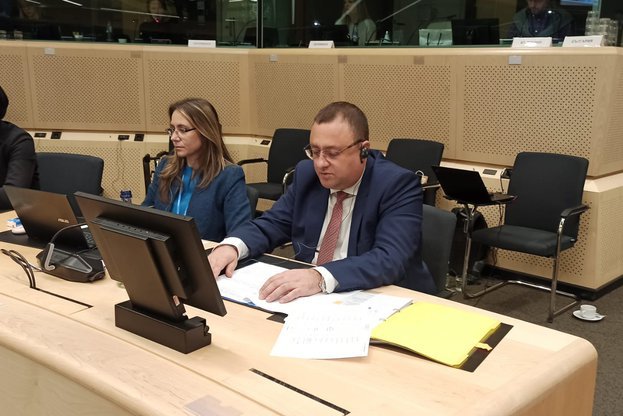 We propose to raise the individual and national de minimis ceilings and to continue the extraordinary support.

“Sufficient support must be provided for the sector in this difficult period of time. We propose to raise the individual and national de minimis ceilings and to continue the extraordinary support.” This was what stated the Minister of Agriculture Dr. Ivan Ivanov. Minister Ivanov expressed support for the EC Proposal for a delegated regulation, the purpose of which is to provide extraordinary support for the adaptation of producers in the agricultural sector in the crisis. "However, we believe that the initial eligibility criteria set would make it difficult to effectively implement the regulation in Bulgaria. This would limit the number of farmers who can benefit from support, and there is a danger that some of the most vulnerable farms will be left without support, "he added. The Minister of Agriculture explained that Bulgaria supports measures proposed by the EC, such as increasing advance payments and derogations related to the conditions for the implementation of green direct payments for the 2022 application year.

Minister Ivanov explained that Bulgaria also welcomes the inclusion of the agriculture, fisheries and aquaculture sectors in the Temporary Framework for State Aid, with liquidity measures similar to those in the Temporary Covid Framework. According to him, Bulgaria's experience shows that this instrument is suitable for providing timely and targeted support to sectors where disturbances are most noticeable. He explained further that the maximum ceiling of 20,000 euros per company proposed in the project is significantly lower than the one set in the Temporary Covid Framework. "This ceiling is too low and will not allow member states to sufficiently support the sectors concerned. We propose that under this measure there should be no ceiling at all, or if there is one, it should be significantly raised. This way, the sector will be able to be adequately supported in the current situation, "he added.

The Minister of Agriculture commented that at present Bulgaria has reached its national ceiling in terms of de minimis aid in the agricultural sector, which is why this possibility of support cannot be used effectively." At the same time, we believe that this is an effective tool that enables member states to deal quickly with the short-term negative effects of unexpected events. In this regard, we propose to raise individual and national ceilings, "he added.

During the meeting the state of the fisheries sector was also discussed. Bulgaria has stated that the current unprecedented situation related to the continued growth of production costs, combined with the strong negative effects of the war in Ukraine, faces the Black Sea region and in particular - Bulgarian fisheries, including aquaculture and processing, increasingly serious challenges. The Bulgarian position states that urgent and adequate solutions should be sought with tools for support from the old and the new fund for maritime affairs and fisheries, which should compensate and mitigate the negative impact of these processes.