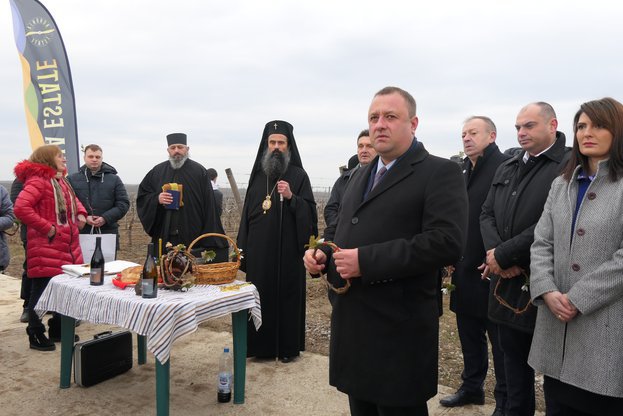 The country has a debt to the North-West region

The state will be a good partner for every farmer." This was what the Minister of Agriculture Dr. Ivan Ivanov announced during the ritual vineyard cutting ceremony in the village of Gomotartsi near Vidin, congratulating the producers on holiday.

The Minister of Agriculture pointed out that the state will support anyone who decides to invest in the wine sector.

The country has a debt to the North-West region, which has great potential for development

"As this year, so in the future we will be side by side with all farmers," said Minister Ivanov.

He said on the occasion of the National Strategic Plan that in the coming days it will become clear to what extent the state will invest in the sector in the next programming period, ensuring that the plan will be submitted to the European Commission by the end of the month.

According to him, the forthcoming large-scale investment in Bulgarian agriculture aims to have on our table products from Bulgarian farmers. The wine sector will be a priority for the Ministry of Agriculture, said Minister Ivanov.

He reminded that under the so-called COVID measure, agricultural producers will receive over BGN 111 million, and the wine sector will also benefit from the funds. After the adoption of the budget, talks begin with producers on how the funds will be distributed.

The measure for restructuring vineyards opens on March 14, the Minister of Agriculture reminded.

"There will be a budget update in July. If necessary, the state will intervene again in favor of agricultural producers, "said Minister Ivanov.

In response to a question, the Minister of Agriculture said that the policy for coupled support will lead to the clarification of the gray sector.

Regarding the export of Bulgarian wines, he pointed out that according to the coalition agreement, measures will be taken to make Bulgarian products more recognizable and preferred in order to turn from an exporter of raw materials to an exporter of finished products.