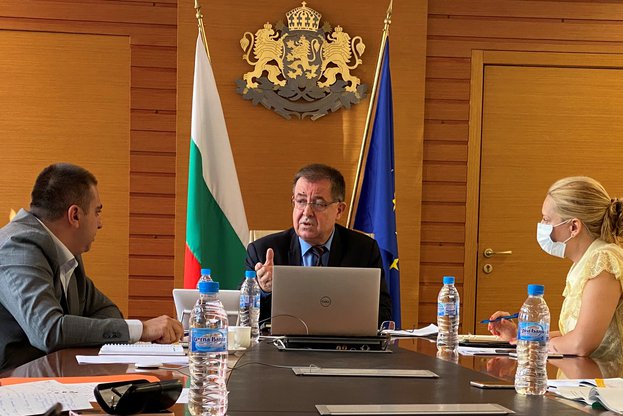 I will ask the State Agency for State Reserve and Wartime Stocks to allocate grain to support animal breeders. This was what announced the Minister of Agriculture, Food and Forestry Prof. Dr. Hristo Bozukov during an online meeting together with the relevant Deputy Minister Assoc. Prof. Krum Nedelkov, representatives of the Association of Industrial Pig Breeding and the Association of Pig Breeders in Bulgaria, as well as some experts from the Ministry of Agriculture and Food. In case the necessary amount of grain is provided, it will be restored to the Reserve next year

The branch need this aid in connection with the low purchase prices of meat and the high values ​​of feed. Prof. Dr. Hristo Bozukov informed the farmers about the talks, regarding the high prices of feed held at European level and that he received the assurance from the Commissioner for Agriculture and Rural Development Wojciechowski that options to compensate farmers are being sought.

The participants in the meeting also discussed the means of animal welfare. Minister Bozukov clarified that so far, nearly BGN 12 mln of the total financial resource amounted to BGN 35 mln, have been paid under the state aid approved for 2021. "By the end of the year, the remaining BGN 23 million will be allocated to the pig industry under the scheme for the implementation of voluntary welfare commitments for pig breeding," the minister added.

During the talks, the leadership of the ministry engaged itself, when updating the budget for 2021, to assess whether it is possible to develop and notify new state aid schemes, through which to increase funds this year. Minister Bozukov said that the possibility of increasing the funds under the scheme for welfare pig breeding would be considered for the next financial year.

In connection with the industry's demands for the inclusion of new proposals in the National Recovery and Resilience Plan, the minister explained that the industry is optimistic for the plan, which aims to restore the economy after the Covid crisis and imposing pre-pandemic resilience.

"Over BGN 16 billion have entered Bulgarian agriculture since the country’s accession to the European Union through a variety of financial instruments provided so far. The expectations of the farmers for the funds set in the plan are unrealistic- not all activities could be compensated, "said Prof. Dr. Hristo Bozukov

The Minister of Agriculture assured the participants in the meeting that the Bulgarian Food Safety Agency is taking all legal actions to control the spread of African swine fever in the country.

At the end of the meeting, Minister Bozukov said that the branch would be informed in a short time about the measures taken at their request, as well as the results of the actions in support of the sector.