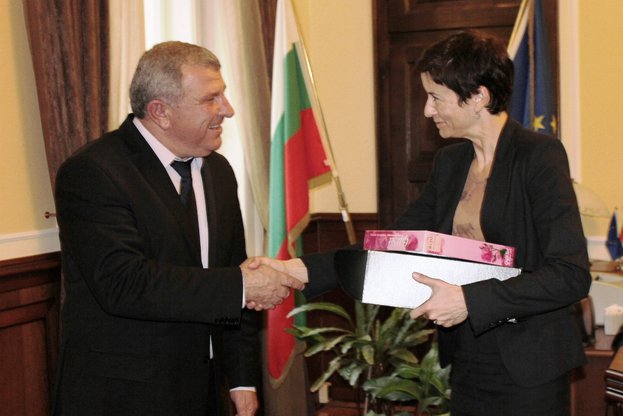 “Both Bulgaria and New Zealand have rich genetic material. We can work together in the exchange of genetic information”. This statement was made by agriculture and food minister Prof. Dimitar Grekov during his meeting with Her Excellency Paula Wilson, New Zealand’s ambassador to Belgium, Bulgaria and Luxembourg, held at MoAF. Minister Grekov and ambassador Wilson discussed the implementation of the Common Agricultural Policy and the reforms adopted by the two countries designed to orient their agricultures towards the new market conditions. “We will find points of support for future joint work, because you have valuable experience which can be of great use for us”, emphasized the minister. He added that New Zealand had a lot to demonstrate to the Bulgarian farmers who were interested in new practices in the management of farms, in the use of modern technologies and in successful ways of selling the produce.
Minister Grekov remarked that agriculture formed about 5% of the gross domestic product in the two countries, but that in our country the agricultural sector had higher percentage of employment – over 20% of the active population.
The minister extended an invitation to New Zealand companies to take part in the Bulgarian agricultural expositions.