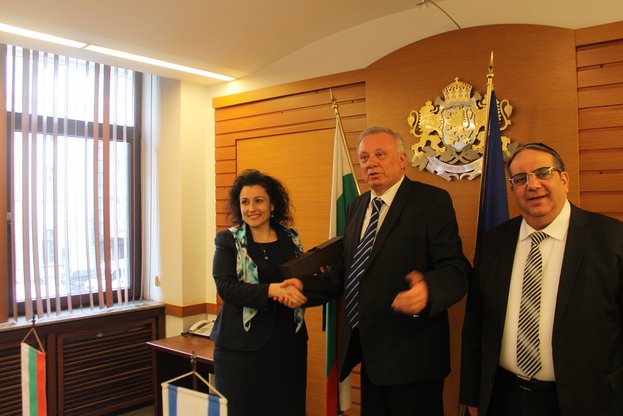 At a meeting between the Minister of Agriculture and Food Desislava Taneva and a delegation of the Knesset of Israel, led by the Chairman of Bulgaria-Israel Friendship Group in Israeli Parliament, Eitan Broshi, the opportunities for Bulgarian farmers to study in Israel were discussed. The meeting was also attended by HE Mrs. Lillian Iritis, Ambassador of the State of Israel in Sofia, and Yigal Gueta, a member of the Bulgaria-Israel Friendship Group in the Knesset of Israel. "The goal is our farmers to learn some innovative practices of Israel," said Minister Taneva. She pointed out that the exchange of good practices in the field of irrigation systems is very important. In her words, we can get knowledge from the Israeli model and to modernize our irrigation structure.

Eitan Brosh said that the realization of the idea of training of Bulgarian farmers in Israel can be achieved through a training program. He expressed hope that the farmers of Israel would be able to invest in Bulgaria in the field of agriculture.
Minister Taneva and the Knesset delegation voiced satisfaction with the cooperation between the two countries in the field of agriculture. The delegation is visiting Bulgaria at the invitation of National Assembly Chairperson Tsetska Tsacheva.