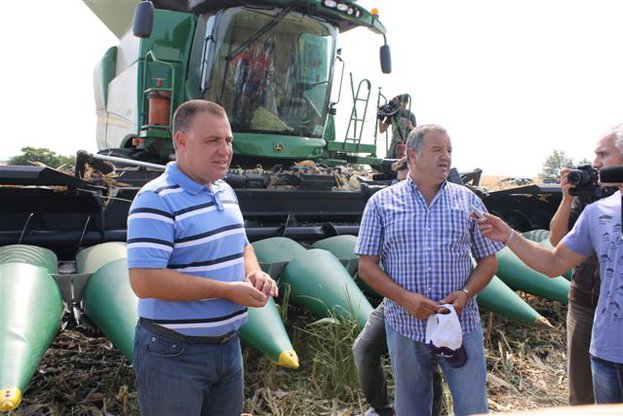 40% less will be the corn harvest this year - this was announced by the Minister of Agriculture and Food Dr. Miroslav Naydenov, who inspected the levels of the harvest of maize in Venelin Delgyanski’s field, near the town of Rakovski. The tendency of reduction in the harvest is spread worldwide and this year our country is expected to yield about 1.2 million tons.

Minister Naydenov added that concerns mainly stem from the fact that maize is a major component of animal forage and lower harvest will inevitably lead to increase in the prices of the forage. "Expensive forage and reduced consumption will inevitably put stock-breeders in the country under huge pressure; that is why stock-breeders will be supported through additional measures ", added the Minister.

He explained that the pessimistic forecasts fall short for now since what he saw already was much better than what he had expected. For the region of Plovdiv the yield is about 300 kg per ha., but there are other areas where the yield is lower and there also are lost areas. If 100% degenerate areas are found the European Regulations will be put into action and victims of the failed crops will be compensated with up to 80% of their losses as long as they are insured said the Minister.

Minister Naydenov announced that every coming year will be more difficult for mankind globally because of the growth of our population and because of climate change. This will lead to food shortages but our country, as a member of the European Union, won’t be put through such a problem, and could instead benefit and increase its production.

The theme of the irrigational agriculture was also touched upon during the visit of Minister Naydenov. He explained that the Government is developing a national strategy for the management of the water sector. The strategy is almost ready. Its preparation was entrusted to the Minister of Environment and Water Nona Karadzhova and has already been discussed at a government meeting. Currently, the water sector is spread across several ministries.