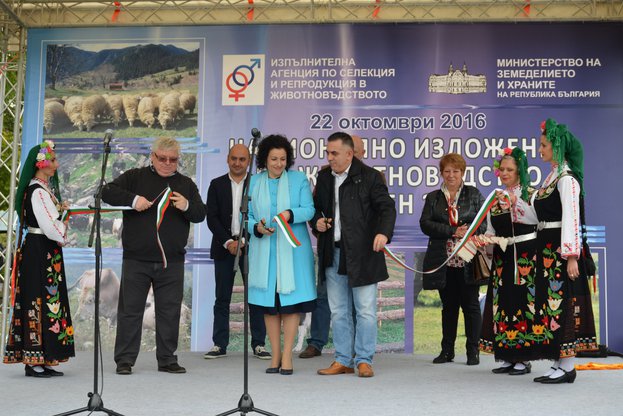 “Livestock breeding sector will receive BGN 230 million by December. Currently, BGN 62.4 million have been transferred, representing 70% of the rates of the three coupled support schemes for cattle.  A maximum possible advance payment of 70% under coupled support schemes for sheep and goats will be carried out next week. In the period between 31.10.-04.11. 2016 the transitional national aid for sheep and goat will be fully paid, as well as the transitional national aid for cattle, extraordinary European aid and de minimis will be also paid in advance ", announced Minister of Agriculture and Food Desislava Taneva at the opening of the twelfth National Livestock Breeding Exposition Sliven 2016.

Desislava Taneva stressed that the Livestock breeding sector has registered a growth in all animal categories except dairy cows that are not under selection control. "I congratulate all animal breeders in Bulgaria for the results achieved. We should develop highly productive breeds in all directions to get a stable market-oriented sector, "she said further.

Minister Taneva wished a great success to the exhibition and thanked the farmers for the good dialogue. She expressed hope that the changes made in coupled support will affect payments more equitably next year.

More than 550 farm animals, demonstrating the rich biodiversity of our country as well as the the achievements of selection conducted by breeding organizations in cattle, sheep, goat and horse breeding have been presented at the exhibition. The event was also attended by Deputy Minister Vassil Groudev, Executive Director of the Bulgarian Food Safety Agency Dr. Damyan Iliev, Mayor of Sliven Stefan Radev and Executive Director of the Executive Agency for Selection and Reproduction of Livestock  breeding prof. Vasil Nikolov.