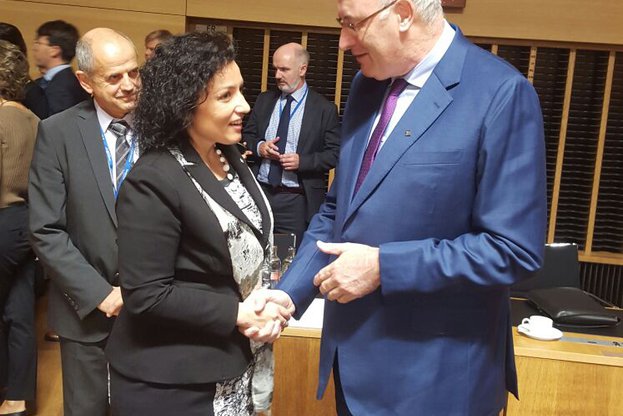 Bulgaria will receive 6 million Euro support for the crisis in the dairy sector. This became clear during the informal meeting of the EU Agriculture and Fisheries Council in Luxembourg. The total fund packade allocated between Member States amounted to 420 mln. Euros. ,, It's very important that funds are not of the budget crisis, but an additional resource that should support farmers immediately. We appreciate that some of the proposals we made in December last year, when we put the question to the crisis in the dairy sector, are set in the package, "announced Minister of Agriculture and Food Desislava Taneva during the Council Minister.


She suggested for  these measures as coupled support for livestock breeding sector, where all the check shave passed , the funds to be paid in advance to 100% immediately after October 16 , not afer  December 1.

Minster Taneva shared that Bulgaria has imposed a complete ban by Russia on exports of plant products as of September 1 this year. It is very important for us in the long run to immediately begin talks between the European Union and Russia to lift the embargo. The longer this embargo continues, the more difficult for our farmers will be to restore their positions on previous markets, "stressed the Minister of Agriculture.

Concerning the proposed by the Commissionmarket measures for the improvement of the dairy sector, Desislava Taneva explained that till the adoption of a legislative proposal under the School  Fruit Scheme, the rates of milk equivalent should be to increased to the amount that covers at least 80% of all costs for the supply of milk and milk products under the scheme. "Under these conditions, the scheme would have had great success in both the social aspect for the education of  the younger generation in healthy eating , as well as for the producers," Minister Taneva was clear.