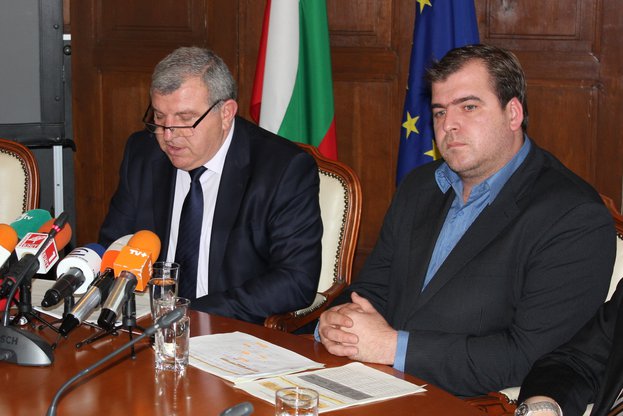 Action plan in MoAF shall pay 278 million EUR by the year-end. Another 117 million EUR will be provided to the Bulgarian local governments

“The Ministry of Agriculture and Food is undertaking urgent measures to guarantee the payments under the Rural Development Programme 2007-2013.” This statement was made by agriculture and food minister Prof. Dimitar Grekov at a press conference, at which the measures for closing the RDP were announced and the new management of State Fund Agriculture – Paying Agency (SFA-PA) was introduced. Participants in the press conference were deputy-ministers Valentina Marinova and Yavor Gechev, the executive director of SFA-PA Miroslav Nikolov, and the deputy-executives Violeta Alexandrova and Nikolay Dachev.


“We are striving not to lose hold of even one lev from the funds under the closing Programme and for this purpose we have developed an action plan with the new management, under which we will pay 278 million EUR by the year-end”, minister Grekov informed. He explained that this amount was continuously decreasing because they were making new payments every day to the farmers. For the speedy processing of the documents, another 70 persons from the regional structures of the Fund were commissioned.

Minister Grekov said emphatically that the problems brought up by the European Commission started back in 2012 with the publications in the Bulgarian media concerning irregularities in the media projects contracted during the former management of the Ministry. As result of the media publications, the European Commission considered the issue on its own and started a long correspondence with MoAF and SFA to clarify the cases. In the course of one and a half year, the Ministry and the Fund did not give exhaustive information about the signed contracts to EC, due to which we received the latest letter, requesting for full and detailed information about the contracts.

“For this reason, we instructed complete internal audit in MoAF and SFA, and requested from the Prosecutor’s Office information concerning the media projects”, said minister Grekov. He explained that it was an extremely embarrassing fact, i.e. the failure of the former SFA managements to submit the complete correspondence maintained by Mr. Porozhanov with the Commission, on account of which personal changes in the Fund management had to be made.
Replying a journalist question, deputy-minister Yavor Gechev specified that only 89 million BGN were paid during the first 9 months of the year, and now we have the difficult task to pay 278 million EUR only by the end of the year. “Nevertheless, we are doing our best to rescue the money of the Bulgarian farmers. After 1 December, 148 million EUR will be paid all at once under all measures from the second axis “Agroecology”. Deputy-minister Yavor Gechev announced further that a forthcoming task of the Council of Ministers was to consider and take decision about surplus contracting for up to 127% under Measure 321 “Essential services to the population and economy in the rural areas”. “In simple words, MoAF will allocate another 117 million EUR under projects contracted by the Bulgarian local governments”, Yavor Gechev added further.