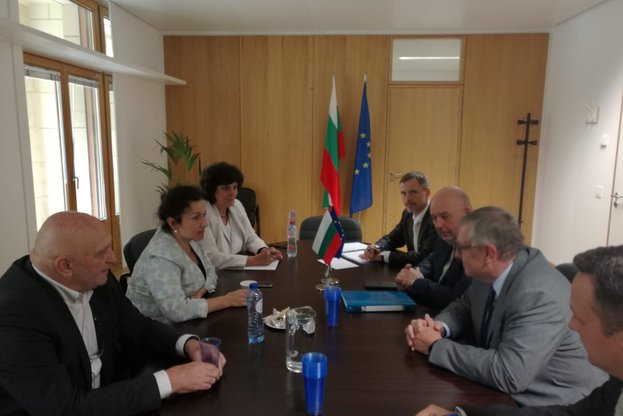 The Minister of Agriculture, Food and Forestry Dessislava Taneva and the Minister of Agriculture of the Czech Republic Miroslav Toman conducted a meeting during which they exchanged information about the measure taken by the countries in order to eradicate the African swine fever (ASF). ‘The Czech Republic dealt successfully with the disease after applying series of measures, among which the identification of all the farms in the areas (including those with a single pig) and the euthanasia of the pigs in the personal farms which did not have biosecurity measures (the ‘backyard’ type),’ stated Minister Toman. He pointed out that a ban was placed on the transportation of animals and on the citizen’s movement in the forests. The breeding of domestic swine was allowed only in the industrial farms in the region.

During the meeting, it became clear that in the Czech Republic, the application of the measures was conducted through daily coordination on regional level and communication with the veterinary service for the constant adaptation of the measures. Actions were taken in order to restrict the movement of the animals by using the natural barrier of the terrain and by constructing an electric fence for driving back the animals. In Toman’s words, it is extremely important to make the decision for declaring the emergency situation in the state, which would guarantee the cooperation of all the authorities in the application of the measures. A daily monitoring was conducted on the feral pigs, as well as the removal of the corpses of wild game. The hunting was allowed outside the infected and supervisory areas but only through individual shooting by police officers with snipers so as there wouldn’t be any movement of the animals. All the dead and killed animals were examined in laboratories and were destroyed by incineration. Minister Toman pointed out that another important measure for the feral pigs was the financial compensation of the hunters in order not to allow the concealment of killed animals.

Minister Dessislava Taneva stated that there is a financial incentive for the hunters in Bulgaria. She presented to her colleague the current situation and the emergency measures taken for dealing with the disease. The Minister of Agriculture pointed out that the disease can be controlled and eradicated only when all the measures are applied and observed, and the Czech Republic is an example of that. The Executive Director of the Bulgarian Food Safety Agency (BFSA), Dr. Damyan Iliev, also took part in the meeting.