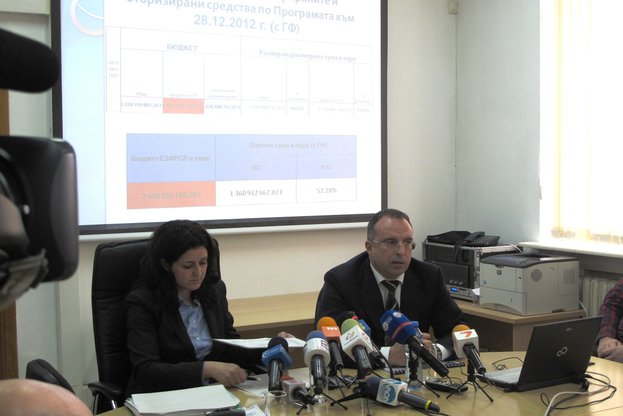 The resources contracted as at end-2012 under all measures of the Rural Development Programme add up to EUR 2.399 billion, speaking for 74,27% of the total programme budget.

Of the contracted amount, EUR 1.926 billion is sourced from the European Agricultural Fund for Rural Development (EAFRD). EUR 1.361 billion, or 52,28% of the EAFRD budget, has been paid out, according to statistics announced at a press conference today by State Fund Agriculture executive director Rumen Porozhanov.

‘This was undoubtedly the most successful year in terms of contracting,’ Porozhanov said. The amount surpasses by over 50% both the 2012 budget and the amounts contracted in any other year of the programme implementation. The 2012 payments amount to EUR 474 million, including EUR 381 million from EAFRD. This is also the top achievement among all years in the period 2007-2012.

Of the subsidies contracted in 2010, EUR 381 million was paid out, or 88,2% of the 2010 budget sourced from EAFRD. According to the n+2 rule, the unabsorbed funding, of EUR 51 million, will be cut from the total programme budget. ‘Back in the middle of 2012 it was projected that we will lose EUR 200-300 million. We worked very intensely and managed to reduce this to EUR 51 million,’ Porozhanov said. ‘Our aim is to scale back the losses under the programme as much as possible, while certainly adhering to the European rules.’

At the moment, contracts with subsidies worth around EUR 930 million are being negotiated, where EUR 750 million comes from the EAFRD. Therefore State Fund Agriculture believes there is ground for successful absorption of the 2013 payments allocation.

It was reiterated at the press conference that the main challenges hampering a complete absorption of the subsidy allocation is the almost 2-year delay of the programme launch as well as the insufficient number of beneficiaries under Axis 2, which encompasses agri-environmental and forestry measures. The allocations for these measures make up 25% of the programme’s total.

‘The headline should be ‘we saved’, not ‘we lost’ EUR 200 million,’ noted deputy minister of agriculture Svetlana Boyanova, adding the money targets not just agricultural producers but also municipalities, industry enterprises and the whole country.

‘For a second year in a row, we pay first to producers dealing with agri-environment in order to push the sector forward. Since 2010, alongside campaigns we offer practical advice on the spot,” she added. ‘We are already more optimistic about absorption under the green measures. We expect that in 2013 we will double payments versus the previous year.’

2013 will also see the launch of the Guarantee Fund, which will support agricultural producers with its EUR 120 million budget. ‘The public procurements have been held, banks have been ranked and just one complaint has been lodged, and we will of course wait until the procedure has closed,’ Boyanova said.