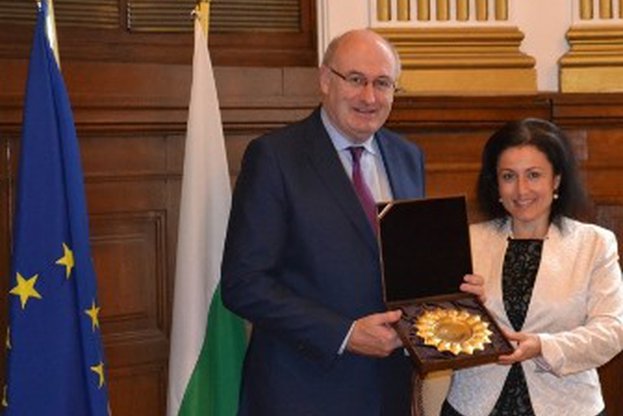 "I am pleased to see the way European money is spent in Bulgaria”, European Commissioner on Agriculture and Rural Development Phil Hogan announced who together with Minister of Agriculture and Food Desislava Taneva inaugurated a new processing factory Vitoro, built with money under OP Rural Development .He greeted Minister Taneva for the proper spending of the money under the RDP and for the successful cooperation between the business and the state administration.” I am happy about the successful cooperation between the owner of the company and the Bulgarian administration, about the 50% financial support for this project. Today the project is already a fact and 65 families will have guaranteed employment, while the Bulgarian society will have the chance to consume safe and good quality food,” said further Phil Hogan.


“The money under the RDP is spent only with the purpose to open businesses and jobs, as well as for increasing the gross added value, “stated Minister Taneva. She added that added that thanks to European Commissioner Hogan and his team Bulgaria received fast approval on the Rural Development Programme 2014-2020.

“I hope that in consensus with the business and with the support of the European Commissioner we will work out a Notification and the European money will reach more beneficiaries,” the minister commented further.She reminded that under the new programme period the business would receive support with more than EUR 1 billion.

The new meat processing company Vitoro was designed and built in 12 months. The project is worth more than BGN 5 million, as half of the money was provided under the OP Rural Development 2007-2013.

Earlier the same day, the two officials discussed the challenges before the agriculture sector in Europe and the opportunities to compensate the agricultural producers after the embargo on food export to Russia. ”For me the dairy sector is the most affected one because the damages caused by the Russian embargo coincided with the rejection of the milk quotas,” Minister Taneva commented. The fruit and vegetables growing sector sector and mostly the cherry producers need support, too because 75% of the general export of cherries used to be aimed for the Russian market,” the minister said further, adding that Bulgaria counted on the European Commission to decide on support in this direction.

Mr Hogan, on the other hand, said that the Commission would consider additional ways of expanding and increasing the budget of the measures for assistance to the fruits, vegetables and dairy sectors. Both officials also discussed options for assistance in the renewal of old or finding of new markets for agricultural products, as well as the opportunities for voluntary tied aids under the Common Agriculture Policy.