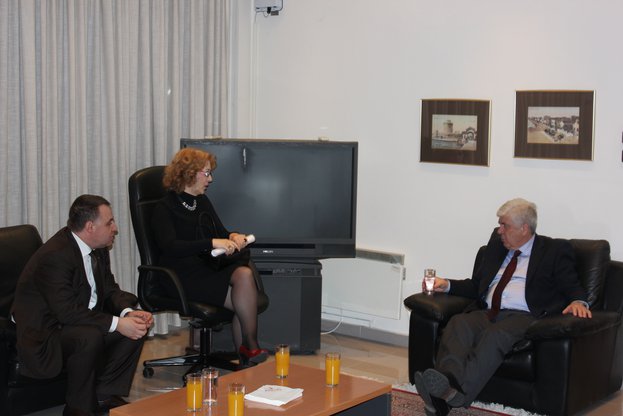 Bulgarian Minister of Agriculture and Food Dr. Miroslav Naydenov and the Greek Minister of Rural Development and Food Athanasios Tsaftaris unveiled a Greek-Bulgarian forum within Zootechnia 2013, the only specialised exhibition for the breeding, meat and dairy animal farming sector in Greece and the Balkans.


The two ministers discussed the protests of Greek farmers, with Tsaftaris pinning the cause on the high fuel and electricity prices. He further assured that for the moment no roads will be blocked in Northern Greece but talks with the protestors continue.


Minister Naydenov explained that the situation in Bulgaria is tense as the local grain producers are considering holding protests in the future. He added that times are tough and the two countries should join forces to tackle the crisis. He noted that markets are hard to get by Bulgarian companies, which are facing stiff competition by non-EU countries such as Turkey, Jordan, etc. Minister Naydenov expressed hopes that the borders will not be closed.


The minister noted that he hopes EU leaders will agree in the shortest possible terms on the financial framework of the Common Agricultural Policy. He wished that in six months, when Greece takes up the rotating EU presidency, the CAP reform will be implemented. The two counterparts agreed they will exchange experts from their respective ministries to step up cooperation in agriculture.

Minister Naydenov invited Tsaftaris to visit Bulgaria during the AGRA International Agriculture Exhibition scheduled to take place at the beginning of March. Minister Naydenov walked round the exhibition hall and visited the stands of three Bulgarian companies.