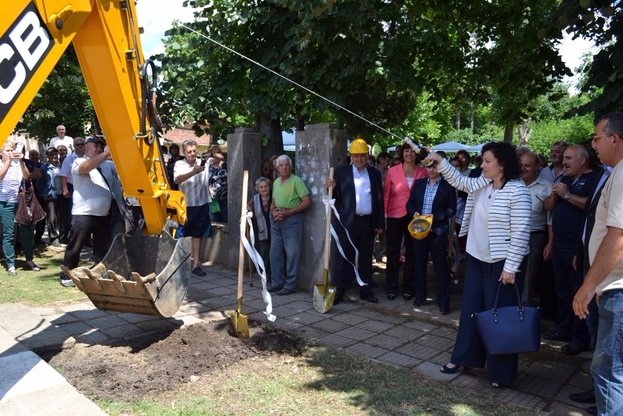 “Despite our best efforts, including personally of Prime Minister Boyko Borisov, who held talks with French Prime Minister, Bulgaria failed to receive an extension of deadline under the Rural Development Programme2007-2013,”said Minister of Agriculture and Food during the sod-turning ceremony for the reconstruction of the water supply network of the northern villages of Podem and Riben, Dolna Mitropolia municipality. The project is implemented under the Rural Development Program and is estimated at BGN 5.8 M. Bulgaria along with other member states asked an extension of  the deadline to use the money granted under the Rural Development Program 2007-2013, meaning that ongoing projects financed under the program should be completed by end-September, therefore, the construction company has to meet the deadline and complete all activities in 50 days; it is important the project ends successfully”, according to Minister Desislava Taneva.


Dolna Mitropolia Municipality and the beneficiaries in it have contracts estimated at BGN 32 million under the previous Rural Development Programme for support of private and public investments. BGN 19 million has been paid. I say the same will hold true for all other beneficiaries – the deadline will not be extended, it will be the same as it is in your contracts but not later than September 15 as it is under the regulations; you need to have the necessary organisation to carry out the contracts and have the resources paid,” Desislava Taneva added.

The Minister greeted Ms  Polya Tsonovska, Mayor of Dolna Mitropoliya Municipality, which is one of the 190 municipalities that have conducted the procedure for priority allocation of pastures and meadows to breeders. "I hope that other mayors will follow you and undertake procedures at reasonable prices to support livestock farmers, which in 2015 was severe," said Desislava Taneva.