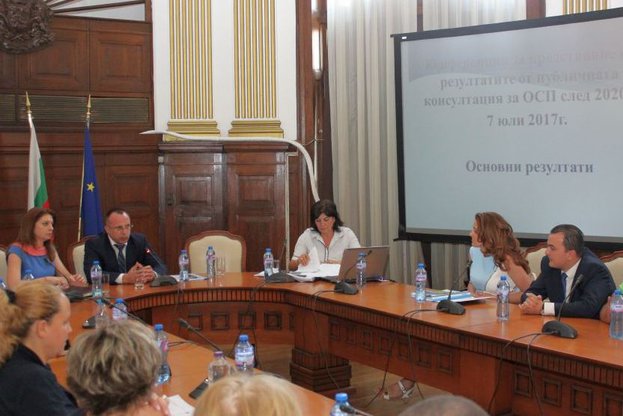 “We need to look for a balance in co-financing. Economic conditions no longer allow lack of co-financing in the first pillar, as it was the political assertion in the past two programming periods, said Minister of Agriculture, Food and Forestry Rumen Porodzanov at a meeting with the agricultural sector, where the results of an online questionnaire of the European Commission on the future of the Common Agricultural Policy were presented. He pointed out that the debate is just beginning, but it is important a unified position to be built and presented to the EC. The balance in the co-financing rules is important because different countries have different budget and the aim is all beneficiaries to be supported fairly.

“Support concerns you the representatives of business. It is clear that there are no fundamental differences between us based on our conversations in the recent months. We will use your views and recommendations”, Minister Porodzanov added.

The study on the future of the CAP was conducted from 2 February to 2 May 2017 on the basis of an online questionnaire. 322 916 views (including large public companies), 1,423 joint positions were sent. The online questionnaire was completed 58 520 times by 21 386 farmers (36.5%), 27,893 citizens (47.7%) 9241 organizations (15.8%) involving private companies, public authorities, trade, business or professional organizations, non-governmental organizations and platforms, scientific and academic circles. In Bulgaria the questionnaire was completed 956 times, 0.3%, as 141of the responses are given by farmers.