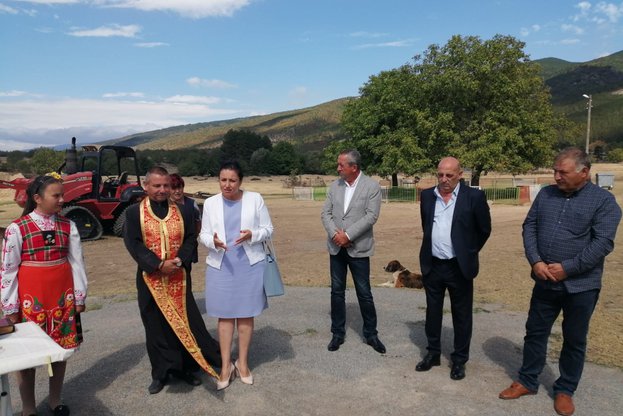 Projects for more than BGN 17 million under the RDP have been approved for the municipalities which are eligible beneficiaries in Sliven District. This was stated by the Minister of Agriculture, Food and Forestry Desislava Taneva, who was present at the first sod ceremony for the construction of a water supply system in the village of Sborishte, Tvarditsa municipality. The project is intended to construct a water supply system of 21 km and is funded under the RDP. It is worth BGN 5.2 million without VAT. According to the plan, the water supply system should be ready in July 2021. Minister Taneva congratulated the team of the municipality for the initiative. In addition to the water supply system, the kindergarten in the village of Sborishte is currently being renovated again under the RDP. "I would be happy if all the projects are carried out qualitatively and in time, which will allow the living conditions for the local population to be improved," said the Minister of Agriculture.

Desislava Taneva announced that Sliven District is among the leading agricultural producers in the country with the largest relative share of production of perennials, fruits and vegetables. "More than 3750 farmers are registered in the district this year. Currently, all of them are eligible in the scope of the application under the extraordinary measure Covid-1, which became possible thanks to an initiative of Bulgaria. To date, more than 1,750 applications have been submitted in the district. The deadline for applications is September 21, "she added.

Minister Taneva clarified that from 2019 to now, a sum of BGN 71 million in direct payments have been paid to farmers in the district. She recalled that the agriculture sector is at an extremely important stage in determining the conditions for the support of farmers in the next programming period. "The German presidency has set a plan in October to achieve a partial common approach in which, outside the general financial framework, all conditions and principles will be clear to the community. I hope that they will be better than the current one, more ambitious in terms of landscaping and environmental protection and more adapted for our farmers, "said Minister Desislava Taneva.