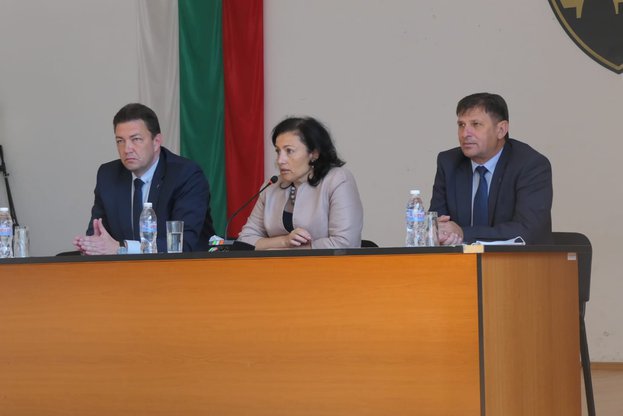 The de minimis phased payment for fruits and vegetables, vineyards and oil-bearing rose will begin after September,16. This was announced by the Minister of Agriculture, Food and Forestry Desislava Taneva at a meeting with agricultural producers in Petrich. She added that checks are currently being carried out on the applications submitted. " A sum of BGN 22 million has already been paid under this scheme to the animal breeders in the country. More than 1630 animal breeders have already received funds through the aid in Blagoevgrad District. Over 4100 beekeepers have also used de minimis funds within the country," explained Minister Desislava Taneva. She pointed out that the most relaxed conditions have been created for farmers applying under de minimis scheme and the extraordinary COVID-19 measure, which are programmed in a way  to make the fast payment is possible.

According to her, in terms of control,witnin this mandate the inspections have been increased more than several times according to the requirements of the European regulation. "The results show that the levels of errors found in our country are below those of other member states. The agricultural services work with maximum capacity, including on the occasion of the additional support measures provided, "said Desislava Taneva. She pointed out that the aim is to deflect fraud attempts and  ensure that the funds go to real farmers.

Regarding the crisis situations with the COVID-19 pandemic and the drought in the country this year, Minister Taneva explained that the state is doing everything possible to make the agricultural sector sustainable one.

"Currently, more than 23,000 farmers have applied for the COVID-1 sub-measure. The acceptance of applications under the measure will continue until September 21, 2020. "said the Minister of Agriculture. During the meeting, Minister Taneva highlighted that the emphasis in the New CAP  Strategic Plan should be the association of farmers. In her opinion, it will give opportunity to alleviate the administrative fees of small producers and the sale of their products.

"Only through the unification of producers' groups a higher income for farmers, who grow crops could be obtained ," said Minister Taneva and urged farmers to look for  additional support in "green architecture" in order to have supplements on their known direct payments.

Desislava Taneva reminded of the prepared Handbook of Green Practices, in which farmers need to go deeper and assess practices which are the most adaptive  to their farms. The aim is to include them in the National Strategic Plan. "Payment under the emergency measures COVID-1 and COVID-2 is scheduled for October 16. After this date, the administrative system will be engaged in payments in various areas of direct payments, "said the Minister of Agriculture.

The meeting in Petrich was attended by Andrey Novakov, MEP in the group of the European People's Party (EPP) and the mayor of the municipality Dimitar Bratchkov.

During his visit to the Pirin region, the Minister of Agriculture also met with livestock breeders in Razlog. They thanked for the quick and easy application for emergency aid and accordingly received timely subsidies. In Razlog, Minister Desislava Taneva announced that 455 projects under the Rural Development Program 2014-2020 have been approved for Blagoevgrad District. The investments are worth nearly BGN 128 million, of which about BGN 13 million are under municipal measures.