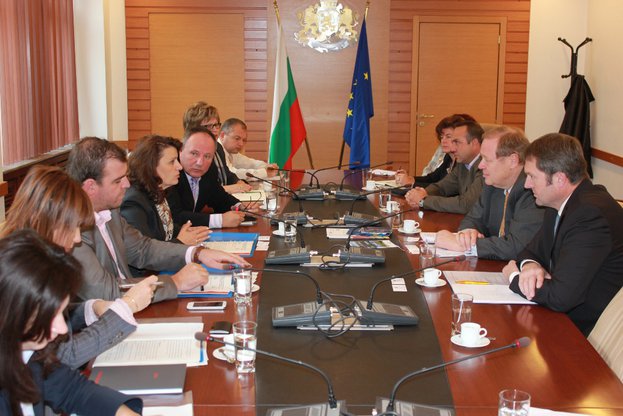 “It is important for the Bulgarian farmers to have the opportunity of offering their produce outside Bulgaria. Raising their qualification through trainings will promote the speeding up of this process.” This statement was made by agriculture and food deputy-minister Valentina Marinova during a meeting of the working group on “Agriculture and Food Industry” with the Bulgarian-German Cooperation Council, which was held in MoAF.


Other participants in the meeting were deputy-minister Yavor Gechev and experts from the Ministry. The

German side was represented by Mr. Hans-Egbert von Arnim – chair of the working group, and Mr. Bernd Koch – President of the German Farmers’ Association.

The meeting determined the main priorities in the cooperation of the two parties, under which their work would be carried out in the meetings of the joint group. Key subjects were stockbreeding, aquacultures, biomass production, development and financing of rural regions. “Development of rural regions is vitally important for our country, because substantial amounts will be allocated by 2020”, commented deputy-minister Yavor Gechev. He added that through the new Rural Development Programme, we were going to aim at improving the standard of life in the small populated areas and at increasing the competitiveness of the small farms.

“Concerning the cooperation in cattle breeding, Bulgaria can be very useful, because it has one of the richest gene pools in Europe, and moreover, it has preserved the purity of our native breeds”, stated deputy-minister Yavor Gechev.


On behalf of the German side, Mr. Koch put forward the idea of developing training initiatives, through which the Bulgarian stock breeders would have access to the most modern tendencies in the sector.